THE 150 SECRET LAWS OF THE DICTATORSHIP

The secret laws issued under the dictatorship are still hidden. But the organization ArchivosChile and La Nación Domingo, break that secrecy and deliver in this report a list of 150 of these legal texts to which they had access, which are still hidden from the knowledge of citizens 20 years after the end of the oppressive regime of Augusto Pinochet.

The surprise is great, since 74.6 percent of them were related to the modification and mainly the increase of the Armed Forces.

The first beneficiary was the Army, which through 13 of these laws (8.6% of the total) increased its personnel by a little more than 4,000, 13.3% if one conservatively calculates that its personnel numbered some 30,000 in 1980. Although, according to defense analyst Eduardo Santos, that year the Army would have reached an unofficial figure of around 80,000 men.

The increases in the Navy, Air Force, Carabineros and civilian police forces do not stand out as much as they do for the men in gray uniforms, in these 150 laws that correspond to those that were published in the Official Gazette in restricted editions.

The purpose of 5.3 percent of these texts, that is, eight of them, was to introduce modifications to Law 13.190, known as the Copper Law, which guaranteed the military 10 percent of the sales of the red metal. Each of these changes “improved” this condition, and even established, through Decree Law 984 of April 11, 1975, a double insurance. In it, it was established that year that “if the total amount of the 10% yield was less than US$ 90,000,000 (ninety million dollars), the difference must be made up by the Treasury”. 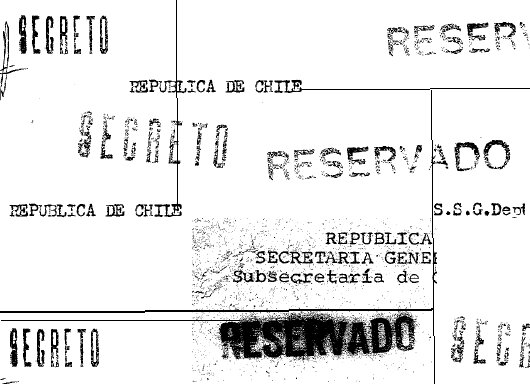 Two years later, on June 23, 1987, the military chiefs acquired even more power over the copper money when Law 18.628 determined that “for the investment of these funds, the agreement of the aforementioned body (referring to the Superior Council of National Defense) must have the favorable vote of the commanders-in-chief of the Army, Navy and Air Force”.

By effect of this secret legislation, between 1978 and 1981 the dictator Augusto Pinochet not only obtained from the Central Bank and the General Treasury of the Republic US$442 million for undetermined purposes that supposedly were for the acquisition of armaments, as already published by La Nación Domingo last January 24, but also attributed to himself powers to obtain in 1980 in Austria 1. 864,087,000 (one billion eight hundred and sixty-four million, eighty-seven thousand Austrian schillings), then equivalent to some US$ 250,000,000 (two hundred and fifty million dollars).

Laws 3466 and 3467 of August 12, 1980, which authorized him to “contract obligations” in that amount of Austrian currency, established that, in any case, it would be Pinochet himself who would “determine the destination of the resources”.

So far, the destination of these Austrian funds is unknown, as well as where the US$442 million obtained for the Ministry of Defense and the reserved accounts of the Army, the Navy and the Air Force went. For the latter amount obtained through six of these laws, ArchivosChile and La Nación Domingo, invoking the Law on Access to Public Information, demanded that the institutions in question declassify the existing documentation, and the same will now be done with respect to the funds from Austria.

At the height of the DINA, the death penalty was for a moment legalized within the four walls where all these provisions were dictated between 1973 and 1990. Law 1629, passed on December 15, 1976, determined that those who, once the state of “national mobilization” of the Armed Forces had been decreed, divulged news of it or its “secrets” by any means, would be shot. The same capital punishment was to be imposed on those who “hindered” this military decision.

Law 521 of June 16, 1974, which created the National Intelligence Directorate, DINA, which is part of this category, lost its relevance years ago. Even the secrecy of its articles 9, 10 and 11, which were even more rigidly guarded and dealt with coordination issues and arrest powers, was largely lost when the horrors committed to exterminate a segment of Chilean society became known.

The same is true of the law that after 1977 created the continuation of the Central Nacional de Informaciones, CNI. However, Law 2881 of October 22, 1979, which “dictates norms for the personnel and establishes the staff”, dictated belatedly a couple of years after the CNI was already operating, provides the information that this repressive organization was initially formed with 552 officials. In 1987, at least, this was already multiplied by a factor of five.

The Army War Academy was favored by these dispositions. By means of Law 1177 of September 8, 1975, the Military Junta ordered that the land of the then Chilean Forestry Institute, which corresponded to lot 5 of Fundo La Reina in that Santiago commune, be transferred to this military center. The law states that the transfer was made by “purchase”.

Another of these laws, passed on October 29, 1976, granted Pinochet the power to sell the Navy-owned passenger ship “El Argonauta”, which made tourist trips along the coast of Valparaíso and other cities in that region.

The military’s secret legislation also revealed that, at least in the Navy, its officers received “bonuses” to improve their income, a fact that was never publicly known during the military period, nor during the 20 years of the Concertación governments.

Two of these laws, number 1589 of October 29, 1976 and 1599 of November 17 of the same year, authorized the Undersecretariat of the Navy to “transfer” a total of US$ 1,167,000 (one million one hundred and sixty-seven thousand dollars) from the “Salaries” item of the Navy to the “General Services of the Navy” and “Military and Police Material and Maneuver Management of the Navy” items.

Law 543 of December 31, 1974, designated some military prosecutors during wartime, who took charge of some of the arbitrary war councils against political prisoners. Among them were Colonels Oscar Medel Ramírez and Juan Toro Dávila, Navy Captains Críspulo Escalona Fernandois, Hernán Badiola Bröberg, Lautaro Sazo Lizana and Sergio Barra von Kretschmann. The latter turned out to be a prominent DINA agent, and was commander of the Naval War Academy in Valparaiso during the time when hundreds of prisoners were tortured there, among them the priest Miguel Woodward, later murdered aboard the training ship Esmeralda and who is still missing today. Barra von Kretschmann is precisely one of the now retired Navy officers who is being prosecuted by Judge Eliana Quezada of Valparaiso for the kidnapping and disappearance of Woodward.

Other secret provisions included the creation of a Space Affairs Committee, modifications to the statutes of the Armed Forces, the Carabineros and the Investigative Police, the establishment of tax exemptions for interest on loans granted from abroad to “National Defense Institutions”, and to provide that the Center for Nuclear Studies of the Army would work jointly with the Chilean Nuclear Energy Commission, to which Law 1507 of June 21, 1976, granted for 30 years the free use of the land located in the Lo Aguirre sector, west of Santiago.

On August 5, 2003, eight deputies of the Concertación, among them the DC deputies Gabriel Ascencio and Jorge Burgos and the socialist Fidel Esponza, introduced a bill to make secret laws transparent. But after multiple legislative procedures and reports from parliamentary commissions, so far the legal initiative has not been successful.

Defense analyst Eduardo Santos interprets the delay explaining that “neither the military nor the parliamentarians are very interested in lifting the secrecy of these laws nor in repealing some of them”. He maintains that “for example, for the military the copper law continues to assure them an important level of funds, and for the parliamentarians the existence of these laws, such as the copper law, saves them from having to explain the defense expenses to their constituents who are in need, because these expenses are covered by this law, so, in a way, there is a mutual convenience”.

Santos makes this statement with the certainty that “the copper law and the 10 percent for the military will remain for at least four more years before the change that is intended to be made now is approved, especially with the existing disagreements between the Armed Forces and the Ministry of Finance, which in the new proposed system wants to control every peso that is spent on defense”.

The analyst has an explanation for the significant increase in the Army’s staff under the period of the military regime that these laws reveal.

“Not that I want to justify anything, but in August 1975 it was assumed that Peru was going to invade Chile through Arica, and in December 1978 the armed conflict with Argentina was going to be unleashed,” he explains.

Other military sources from within the Army, who prefer to keep their identities confidential, provide another analysis. At least two of them agree that one of Pinochet’s fundamental objectives until the last moment before the end of the military regime was to strengthen and make the legacy of his management at the head of the institution, and above all at the head of the State, last for generations. “That is why Pinochet was very interested in expanding the ranks of young officers, and this was achieved precisely by considerably increasing the number of officer positions, as can be seen through this type of secret laws,” they say.

So far, beyond gestures impossible for the Army not to make, such as honoring him and admitting that its commander in chief, General Carlos Prats, was assassinated by men from its own ranks, these military sources who remain on active duty appreciate that the figure and regime of Pinochet continues to be “revered” and even “remembered with nostalgia by not a few officers who benefited from Pinochet’s shirttails”. They refer to the dictator’s “loyal men”.

As can be seen, most of these secret laws, of which there are controlled copies in various institutions, today have little of such quality and many of them are already surpassed by time and events. But they continue with that safeguard. “Because the Armed Forces have always been secretive, but also because there are interests in keeping them that way, as I said before”, says Santos.

However, there are a couple of dozen more of these types of laws that remain in the possession of the Comptroller General of the Republic and the Senate, and which are part of those that were not published in restricted editions of the Official Gazette. They have already been duly requested by invoking the Law on Access to Public Information.

Secret Laws of the Dictatorship

Overview: The secret laws of Pinochet