No Result
View All Result
Home Investigations Bureaucracy of Death

Investigation Overview: The Bureaucracy of Death – Executions in Chile 1973

Of the 1,682 deceased who arrived at the Santiago morgue between September 11 and the end of December 1973, 890 were people who died as a result of the military coup. The reports and unpublished documents published by ArchivosChile show, from within government institutions, the functioning of the government bureaucracies in charge of cleaning up after the dirty work of the military and police forces. With varying degrees of connivance and negligence, these institutions served to distort and hide the reality of the mass executions. The military prosecutors’ offices were responsible for ignoring and legally covering up the crimes. The investigation based on these records made it possible to conclude, among other things, that there were 150 people killed by gunshot wounds who could have been victims of political repression.

The machinery for executing and disappearing people was set in motion immediately, and the first bodies of people shot to death arrived at the Santiago morgue on the night (8:00 pm) of September 11. With the military intervening in all State services, normal procedures were altered in the institutions that, in normal times, were in charge of the investigation of violent deaths, starting with the Servicio Médico Legal (SML) and the Santiago morgue. In the following weeks, when the greatest number of people died due to political repression, a true bureaucratic circuit of death was constituted between four institutions: the SML, the Servicio de Registro Civil e Identificación, the General Cemetery of Santiago and the military prosecutors’ offices, which with varying degrees of connivance and negligence serving to distort and hide the reality of the massive political executions.

The chaos of those first weeks explains only part of the errors and omissions that were committed; the chaos actually helped the the new authorities achieve their goals. Although the crime courts were left intact, they were displaced from day one in the investigation of these deaths. Deaths caused by gunshot wounds and with indications of having been caused by military or police forces were placed under the jurisdiction of military prosecutors’ offices. This implemented a de facto system that served not to bring justice, but to legally ignore and cover up crimes.

ArchivosChile’s more than one year investigation is based on documentation obtained through the Transparency Law from the SML and the Registro Civil and the review of the archives of the Second Military Court and the General Cemetery. This documentation makes it possible to follow the day-to-day treatment of all the victims whose bodies arrived at the Santiago morgue between September 11 and December 31, 1973. The research was complemented by dozens of interviews with people who worked in the institutions and had direct knowledge of the consequences of the new system imposed.

Deceased admitted into the morgue, 1973

*ArchivosChile includes in this category the cases classified as victims of human rights violations by the three commissions that have been created for this purpose since 1990, plus other “potential” cases (150) in which it can be determined with a high probability that they were politically executed due to the circumstances of their deaths.

**The Corporation for Reparation and Reconciliation wrongly qualified a deceased who arrived at the morgue before September 11, 1973. See report “The strange case of the two Luis Curivil“.

ArchivosChile now makes available to the public all the original documents and databases that not only reveal how the different agencies operated, but also make it possible to examine the data of each case and analyze it from a global or individual point of view. The data forms the basis of an interactive map that dynamically presents the day-by-day progress of the avalanche of executed persons whose bodies were collected from the streets, rivers and other places in the city and delivered to the morgue.

The Servicio Médico Legal, by resolution of the Council for Transparency in favor of ArchivosChile, delivered in the form of an Excel database, the following information records of deaths between September 11, 1973 and December 31, 1973 in Santiago and 14 other cities in the country. It also allowed ArchivosChile to photograph the 69 pages of the book of entries of deceased persons, known in the service as the “Transfer Book”, where the officials noted the details of the trajectory of each deceased person in the morgue, from their arrival to their delivery for burial. The Servicio Médico Legal provided other essential details to understand the work of the institution in that controversial period: based on the autopsy reports of each deceased, the SML officials supplemented the database with the cause of death and the description of the fatal injury in each case.

These data, as will be seen in the reports, allow us to reconstruct for the first time and with new details the systematic actions of the military and police in the mass executions, along with their interaction with the institutions that were legally constituted in normal times to investigate violent deaths.

A scene out of Dante

After September 11, the Santiago morgue was transformed into a scene out of Dante. Accustomed to receiving an average of less than 10 corpses per day (during August 1973 a total of 286 arrived), morgue officials had to deal with several times that number. Between September 11 and 30 alone, 588 bodies arrived. Of these, 397 were deaths from gunshot wounds.

The investigation based on these records allows us to conclude with a high degree of certainty that there were 150 people admitted to the morgue who, due to the circumstances of their deaths, could correspond to victims of human rights violations that have not been classified as such by the official commissions.

The investigation also obtained a large part of the fingerprint records of the Registro Civil taken from the victims in the morgue and their letters to the SML confirming their identities. This documentation revealed inconsistencies in the dates of entry to the morgue, the dates of death, the causes of death and the final destination of the bodies. It also confirms serious errors regarding the identification of the politically executed, so that some of them remained unidentified, and others never appeared in the entry book of the Legal Medical Institute of Santiago.

The data obtained from the SML and the Registro Civil, as part of ArchivosChile’s research, opens the possibility of following new leads in some cases of missing persons in this period, allowing the new information to be cross-checked with data on detainees-disappeared available in official reports.

The black hole of the military prosecutors’ offices

It was also possible to review – but not copy or reproduce – the scant documentation filed in the Second Military Court of Santiago, which assumed early jurisdiction over almost all of the deaths by gunshot wounds – 785 of the 890 confirmed and potential human rights cases. The case files themselves have been burned, the Army claims, but the books that recorded the status of the cases reveal that no investigation was ever opened into the hundreds of gunshot deaths referred by military prosecutors, as required by the laws and regulations kept in force by the military regime.

ArchivosChile also published a report on cases in which the Second Military Prosecutor’s Office subjected people who had already been executed to courts-martial.

The silence of the cemetery and the morgue

Documentation of the period from the General Cemetery uncovered by ArchivosChile shows that hundreds of shot victims were transferred from the morgue. These records show the admission of only a fraction of them, and in many cases, on dates different from those indicated in the SML’s books. Many victims sent to Patio 29 or to the crematorium of the General Cemetery as NN, without their families’ knowledge, had already been identified by the Registro Civil. Errors were also detected in the descriptions of the place and date of burial, including victims “cremated as indigents”, which in some cases turned out to be false.

Also available from ArchivosChile are the SML records as a searchable Excel file showing the admission of the deceased to the morgue; the date, place and cause of death; the names of the doctors who performed the autopsies; the court or prosecutor’s office that referred the body; the date on which the body was removed and by whom; and its final destination.

This new data has been cross-referenced with information from the Rettig Report, updated with the victims recognized in its most recent version of August 2011, and is complemented with information regarding the confirmed identifications of Patio 29 of the General Cemetery and other places where bodies were found; the judicial situation of each case; the date on which the Registro Civil confirmed the identity of the deceased, and the names of those confirmed executed without delivery of the body, among other data.

There is also an interactive map, using both data sources, showing the geographic location of the dead during the first months of the military dictatorship. It shows the details of each victim, with the description of the case in the Rettig Report. This map distinguishes between the Rettig cases and the 150 cases that, according to ArchivosChile’s research, correspond to potential victims of human rights violations due to the circumstances revealed in the records (deaths by gunshot wounds and jurisdiction of the military prosecutors, among other factors), but have not been officially recognized as such. 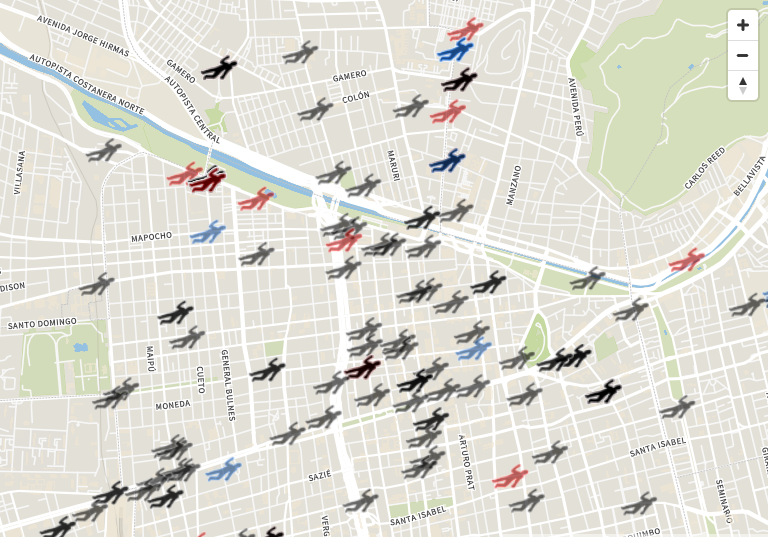 Excluded from the map are those cases that, due to the circumstances reported in the morgue records, correspond to natural deaths, accidents or crimes with no political connection. However, all these cases are included in the database in Excel format.

ArchivosChile has published a representative series of documentation obtained through the Transparency Law or voluntarily submitted by the following institutions:

ArchivosChile was not authorized to copy or otherwise reproduce the documentation available at the Second Military Court and the General Cemetery; only on-site review was permitted.

The interviews conducted by ArchivosChile researchers covered the actors of the time, including officials from the morgue, the Registro Civil, the General Cemetery and the Second Military Prosecutor’s Office, as well as relatives of the victims, lawyers and human rights specialists. The national and foreign press of the time was also reviewed.

Upcoming reports narrate how the bureaucratic circuit of death operated within these institutions. Three other articles focus on specific cases: the erroneous classification of a person who died before the coup (The strange case of the two Luis Curivil), the inconsistencies in the information available at the morgue on the deaths of Littré Quiroga and Víctor Jara, and the use of the Bulnes Bridge on the Mapocho River as one of the preferred walls for the military and Carabineros, where half a hundred people were shot during the first weeks of the military dictatorship. These last two will be published soon.

Special recognition is due to Miguel González Lemus and Pablo Ruiz Tagle, professors at the University of Chile Law School, who supported the project with indispensable legal work, including the drafting of the complaint before the Transparency Council, which ruled that the Servicio Médico Legal should provide the requested data in its entirety.

We are grateful for the collaboration of the authorities and officials of the Servicio Médico Legal throughout this investigation.

CIINFO received funding from the Ford Foundation, the Open Society Foundation, and the Institute of International Education for the work of ArchivosChile.

Columbia University Global Center for Latin America, Santiago, supported the research work in the final phase and sponsored the presentation of the research results at the Museum of Memory and Human Rights.

Inside the Instituto Médico Legal (I): Bodies at dawn

Inside the Instituto Médico Legal (III): From the morgue to the cemetery