Book implicates Kissinger in the assassination of Allende’s friend

Published by the Clarín newspaper on July 27, 2010 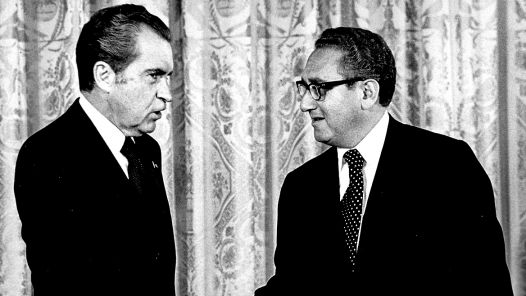 General René Schneider, Commander in Chief of the Chilean Armed Forces and great defender of the Chilean Constitution, was assassinated on October 22, 1970 for having said that the military should support Salvador Allende if he won the elections.

There was always the suspicion that his assassination was supported by the CIA. Although so far no one has been able to prove it with certainty, last week two new pieces of evidence emerged. According to investigators who know the subject well, the new evidence is convincing.

The Washington Post published a transcript of a conversation in which President Richard Nixon and his then National Security Advisor, Henry Kissinger, joked about a CIA assassination that could be none other than Schneider’s.

At the same time, ArchivosChile, an NGO, published excerpts from a confidential book of the U.S. Central Intelligence Agency that holds Nixon’s aides responsible for Schneider’s assassination. [See article on ArchivosChile]

This book, which is the official biography of then-CIA Director Richard Helms written by Robert Hathaway based on interviews with him, came into the hands of the well-known and highly respected journalist John Dinges as part of his ongoing investigation into the Schneider assassination. A professor of journalism at Columbia University in New York and author of two other books on Chile, including “Operation Condor: A Decade of International Terrorism in the Southern Cone,” Dinges told Clarín that “between the excerpts and Helms’ biography, it is clear that the CIA was involved in Schneider’s murder.”

Dinges [director of ArchivosChile] explained that “Kissinger always said that the CIA, a week before the assassination, stopped financing the group (known as Track II) led by General Robert Viaux, who killed Schneider”. But in the book, Helms disproves this. In fact, one of the excerpts from the text reproduced by ArchivosChile on its website [www.ArchivosChile.org] reads:

“In his memoirs, Kissinger wrote that he then (on October 15, 1970) ordered an end to Track II, and as far as he and President Nixon were concerned, his order put an end to all covert activity aimed at preventing Allende’s election (Kissinger, White House Years, pp. 674, 676). If that was Kissinger’s intention, it was not so understood either by Thomas Karamessines (head of operations in Chile) or by the CIA“.

According to Dinges, the CIA text, in the paragraph below, clearly points to the responsibility of Nixon and Kissinger in Schneider’s death:

“It would be unfair, however, to pin the primary responsibility for Schneider’s death on the CIA as an instrument of American policy. That burden must rightly rest on an administration that insisted on sparing no effort to deny the presidency to Allende.” [refers to the Nixon administration].

The transcript of Kissinger’s conversation with Nixon, published in The Washington Post tends to demonstrate that.

They were talking about another assassination, that of one of Allende’s political adversaries, the former Interior Minister of the Christian Democratic Party, Edmundo Pérez Zujovic, who was assassinated on June 8, 1971 by a group of extreme leftists.

Upon learning that some in the Chilean press blamed the CIA for Pérez Zujovic’s assassination, Nixon reacted with disbelief. Kissinger quipped that the CIA was “too incompetent.”

According to Dinges, “two Chilean groups, both with links to the CIA, carried out three attempts to assassinate General Schneider and on the third attempt they riddled him with bullets. He suffered for three days (not three weeks) before dying on October 25, 1970″.

Note extracted in its entirety from Clarin.com, with some corrections and clarifications from ArchivosChile, indicated by [_____].

The Dark Side of a CIA ‘Black Ops’ Memoir